Mole crickets spend most of the year burrowing just below the surface of the soil. They are active above ground in the spring (April and May in Oklahoma) for mating and dispersal flights and to some extent in the fall (September and October). Mole crickets feed at night during warm weather and after rain showers or irrigation. They come to the surface and feed on organic material, including grass, and other small organisms, including insects. During the day, and during periods of drought, they remain in their burrows, often for long periods of time.

Carpenter Ants - Carpenter ants normally construct their nests in hollow trees, logs, posts and landscaping timbers. They prefer to nest in wood that is moist and rotting or that has been hollowed out by decay or by other wood-destroying organisms. 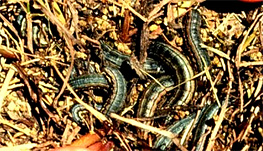 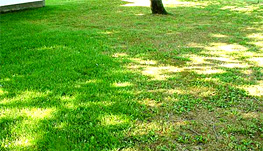 Army Worms - The fall armyworm is a good example of a pest that can sneak up on you. When it does, the results can be disastrous. The larvae feed at night on grass blades. The caterpillars feed on a variety of plants. Notably, warm-season grasses such as Bermuda grass, St. Augustine grass and some others are commonly attacked. Among the cool-season grasses, bluegrass, ryegrass, fine fescue and bent grass are preferred cool-season turf grasses. During the day the larvae hide in silk-lined tunnels or burrows at or slightly into the soil surface. Some species damage plant crowns or roots as well as blades. Heavy infestations may seriously damage large areas of turf. (An infestation of Army worms can destroy a lawn within 2 to 3 days.) 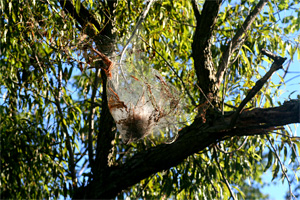 Webworm - The most notable aspect of this pest is the unsightly silken web that it produces. Many times, there are many of these webs per tree. These webs are started near the tips of the branches and gradually are extended down the branch towards the trunk. The caterpillars cover and skeletonize the foliage as they proceed. The adult moths are white and are rarely noticed or recognized except to the trained eye. Larvae are pale yellow and hairy. Injury is mostly aesthetic.

Grubs - White grubs may be the most damaging turf insect pests in the United States. The grubs live below ground and feed on the roots of tender grass plants that soon kills the plant. They are most destructive mid-late summer, but the damage they cause may not show up until early fall and by then, it's too late.

Moles - Moles are insectivores, not rodents. They eat grubs and insect larvae, though most of their dietary needs come from earthworms. On occasion, moles may eat a small rodent trapped in their runway. Moles are active day and night throughout the year, but they are most visibly active during the spring and fall on damp days or following rain showers when they push up more tunnels and mounds. When the ground surface becomes frozen in the winter, or very dry during the summer, moles use only the deeper burrows. 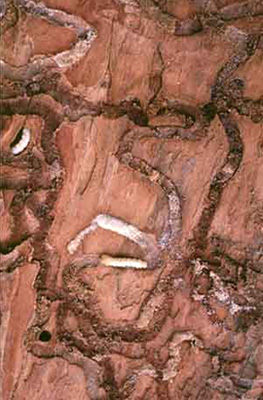 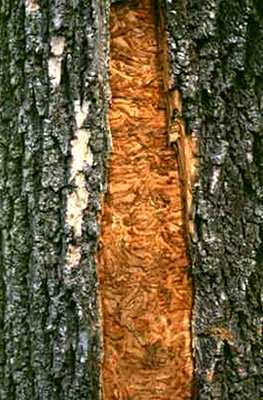 Borers - Some of the most serious tree pests we encounter are the borers, insects that tunnel under the bark or deep into the wood of trees. Because of the damage to moisture and nutrient-carrying layers of the sapwood, borers are usually fatal to the tree. It is the tunneling activity inside the wood that causes the damage. Trees that are weakened stress, extensive defoliation, drought, or other causes, may be more susceptible to borer attack the following season. Aspen, cottonwood, willow, birch, ash, lilac, juniper, pine, spruce, and fir are commonly attacked by borers. However, if infestations are found early enough, and the pest is not a deep-boring species, the tree can sometimes be saved.

Cutworms - some cutworms are spotted, others are striped. Usually they hide in the soil during the day and feed at night. They are the larvae of night-flying brown or grayish moths. Cutworms occasionally infest lawns. They feed on the leaves or cut off the grass near the soil and may do severe damage to seedlings of Bermuda grass, Bent grass and Ryegrass. Cutworms often appear in the early spring when temperatures are slightly above freezing. Damage appears as closely clipped grass in patterns radiating from their tunnel or hiding place. 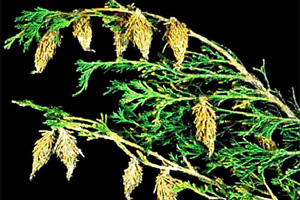 Bagworms - Bagworms are caterpillars that make distinctive spindle-shaped bags on a variety of trees and shrubs. They attack both deciduous trees and evergreens, but are especially damaging to juniper, arborvitae, spruce, pine and cedar. Large populations of bagworms can strip plants of their foliage and eventually cause them to die. Infestations often go unnoticed because people mistake the protective bags for pine cones or other plant structures. In Oklahoma the most common hosts are eastern red cedar, other junipers, and arborvitae. Other hosts sometimes damaged include pines, spruce, bald cypress, maple, boxelder, sycamore, willow, black locust, oaks, and roses. The bagworm has been recorded on 128 different plant species in various parts of the United States.

Spider Mites - Spider Mites are spider like insects that can even produce a fine silk webbing. These pest are small measuring 1/50th of an inch but their damage can be big especially when there are large numbers of them.

They do their damage with tiny piercing mouthparts that remove the contents individual plant cells. It takes a lot of them but with sufficient numbers they can cause the foliage to turn a yellow or bronze cast which will result in the foliage dropping off. In addition to being discolored, if an area is heavily infested the plants may be stunted or killed. Spider Mite activity usually picks up during warmer periods. 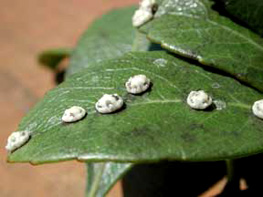 Scale - Scale insects are often inconspicuous pests of many evergreen and deciduous plants. They can occur on leaves, twigs, branches or trunks. Their small size and general lack of mobility make them difficult to notice by the casual observer. Scales derive their name from the shell-like, protective covering they form over themselves. Scale insects cause damage by removing vital plant fluids from their hosts using their sucking mouth parts. In some instances, scales weaken plants making them susceptible to damage from secondary pests such as borers or environmental extremes, which may ultimately kill the plant.

Aphids are small soft - bodied insects. They may be yellow, green, pink, red, purple, brown or black in color. There is also considerable variation in size between species. Some infest only one plant species, while others feed on a wide variety of hosts. Aphids suck plant fluids from leaves, buds, stems and bark. Their feeding may cause discoloration, distortion, stunting, individual leaf death and occasionally severe defoliation. As the insect grows it periodically sheds its skin, leaving behind a white casing in the shape of its body that often sticks to plant surfaces. They excrete a sticky substance called honeydew that covers foliage, cars, furniture, etc. Black sooty mold often grows on foliage that is covered with honeydew. It can be unsightly and sometimes injurious.

Lace Bugs - Lace Bugs are common pests of azalea, rhododendron, sycamore, broad-leaved evergreens and many deciduous trees and shrubs. The adults have highly ornamented wings and a hood-like structure covering the head. The entire surface of the insect is covered with veins that look like lace. Adults and nymphs suck chlorophyll from the underside of leaves. This causes the upper surface to appear stippled with minute white spots. Later, these small spots merge and the leaves turn yellow. Heavily infested plants become unsightly and vitality is reduced. Sever infestations may cause premature leaf drop on shade trees, and even the death of small shrubs. The presence of these pests can also be determined by the black or brown fecal spots they leave on the lower leaf surface.


We Provide Services to the Following Cities, Towns and Surrounding Regions of OK: